Our lodge was founded on June 28, 1907 and is now over one hundred (100) years young. The installing officer was H.M. Hund, a Deputy District Grand Exalted Ruler from Tampa Lodge No. 708.   Our own first Exalted Ruler was William R. O’Neal, a prominent local insurance agent.  A leader in banking and insurance, O’Neal was also a railroad agent, Postmaster, School Board Chairman, an acting Orlando mayor, President of the City Council, and a longtime trustee of Rollins College.  He was also a member of the Odd  Fellows, from whom temporary space for our new Lodge was first leased.   Our Trustees subsequently leased other space from the YMCA for the sum of $40.00 monthly.   Thereafter, a lot located at Central and Court Streets was purchased from Mr. Charles Rock for $1,250.00., and a contract for construction was let for the construction of a Lodge building at that location for the sum of $8,500.  A picture of that Lodge building is on display in our lobby, and the cornerstone from that building is on display in the Orange County Historical Society Museum. 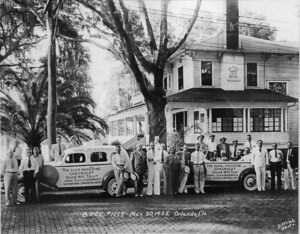 The building was thereafter sold to Orange County and put to public use, following which our Lodge purchased the home of S. Walter Howe at 409 East Central Avenue overlooking Orlando’s famous Lake Eola. where our Lodge remained located until 1969.   A picture of our Lodge as it was in 1935 appears to the left of this paragraph.

Brother Dave Sholtz was the first Elk from the State of Florida to serve as  Grand Exalted Ruler of the Elks, and held  that office during the years 1936-1937.   Brother Sholtz also served as Governor of the State of Florida from 1933-1937.   During his tenure as governor, he established the Florida Park Service and Florida Citrus Commission, passed a  worker’s compensation law, mandated free textbooks in public schools, and funded salaries for public school teachers. 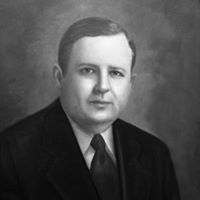 In 1932 Brother Harry Miller presented Grand Exalted Ruler Sholtz with the deed to a hotel in Umatilla, Florida, which became the Florida Elks Children’s Hospital.   The hospital provided free care for children with polio, orthopedic injuries and brain trauma for a period of 65 years until its closure in 1998, and during its existence was supported by Elks Lodges throughout the State of Florida.  The hospital was also supported with funds derived from  the operation of what  was originally known as the Tangerine Bowl in Orlando but it now known as the Citrus Bowl.   In fact, on September 25, 1946, Exalted Ruler of our Lodge Alf A. Hazen appointed the first Tangerine Bowl Committee, whose members included Lawrence Sattariano, Hanley Pogue, Cracker Jim of  Sentinel, C.W. McDaniel, Glen C. Cole, James J. Hacket, Frank Carboy, and Nick Serros. The first game was between Catawba College and Maryville College. Each team received princely sum of  $3,500 and the Elks Children’s Hospital received a donation of $2,736.75.  The good work formerly undertaken by the hospital continues on through this under the auspices of Elks Children’s Therapy Services, which provides in-home therapy for afflicted children throughout the State of Florida.

Orlando Does Drove #66, our wonderful ladies organization, was founded in 1951 that has faithfully and devotedly supported our Lodge year after year since its foundation.

In 1959, Charles Klotz was Boy Scout Chairman, and Dr. John Heitz was Scout Master. Through their efforts, the first handicapped boy scout troop in the United States was formed. 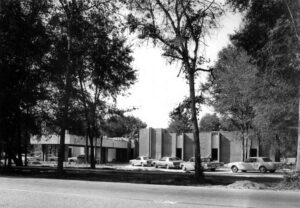 1969 proved to be a disastrous year for ourLodge, for it was in May of that year that fire destroyed much of our home at 409 East Central Avenue. After much searching, property was purchased at 12 North Primrose, and has been the site of our present home for nearly 50 years. Dick Branham was Exalted Ruler of the Lodge in 1972 when our new Lodge building, as shown to the left as it neared completion, was completed and on the momentous occasion of the opening, the Grand Exalted Ruler, Gene Furnace, was here for the dedication. The Lodge was opened with a Gala Celebration to the music of Sammy Kaye. The Lodge prospered and our officers brought national recognition by winning the National Ritual Contest in 1973-74. Our Lodge was also honored that same year when Brother Al Ehrlich was elected State President. This was the second time that the Orlando Lodge #1079 would be honored with a member as State President, the other being C.M. Broadwater in 1908.

This bit of nostalgia was collected from numerous sources and reflects some of our most fond memories of the many years devoted to good works and fellowship.

Map to our Location